The Treaty of Finsbury Park 2025 is a game in 3 acts, a critique of colonialism as expressed through human domination of all living creatures and systems. It is created and played in the digital and physical urban green spaces of Finsbury Park in London. Like many urban parks, Finsbury Park is fraught with environmental issues from noxious gasses and traffic noises to governance struggles and financial sustainability. If colonial systems of dominance and control over living beings continue, we all face an apocalypse. The Treaty project reflects on the dawning of interspecies democracy and envisions a new era of equal rights for all living beings, to organise and shape the environments and cultures they inhabit. It is conceived as part of Furtherfield’s Citizen Sci-Fi program and centered around its theme Love Machines.

Based around a set of interspecies assemblies and LARPs – or live action role play games – the Treaty of Finsbury Park 2025 is played from more-than-human perspectives to encourage the blooming of bountiful biodiversity and interspecies political action: think like a dog, bee, or even grass and help change the way we all see and participate in our local urban green spaces forever. The LARPs and assemblies lead to the creation of a Treaty in 2025, in which the rules and framework of “the game” are reset for environmental justice: participants are to negotiate an unprecedented mutual agreement on behalf of all organisms in the face of an unprecedented threat.

By creating The Treaty of Finsbury Park, human people build empathy pathways to other beings. They learn about and acknowledge the equal rights of more-than-human people to the same range of freedoms they expect for themselves. By signing the treaty they commit to upholding those rights.

The Treaty events start from the following scenario: In 2020, NASA prepared a mission to colonise Mars. Alone in the expanse, the desire to set sail into the void is understandable for a frightened globe. A planetary health check reveals the terrible reality: countless lost species and one million additionally at risk of extinction, their erasure a direct result of relentless human activity. Five years later, an inter-species diplomatic mission convenes to negotiate a mutually assured agreement to reclaim the battered living, mechanical and digital systems for mutual care and respect.

“In The Treaty of Finsbury Park 2025, we are catapulted several years into the future where all the species of the park have risen up to demand equal rights with humans. After much unrest, it has been agreed that a treaty will be drawn up, designating these rights, but first humans must learn to better relate to and understand non-humans so they can cooperate better together. Thankfully there has been a new invention – The Sentience Dial – which allows humans to tune into all the flora and fauna of Finsbury Park.”

At the project’s core is a provocation: humans live in highly curated isolation, alienated from a planet teeming with life, by the imperialist systems of domination that we have created to control it. Rather than nurturing kinship with the vibrant ecologies of creatures in our own world, we try to cure this loneliness by seeking companionship from our machines or look far beyond our own realms for signs of life. Drawing on this premise, the project is exploring new ways to build empathy pathways to non-human lifeforms through play. 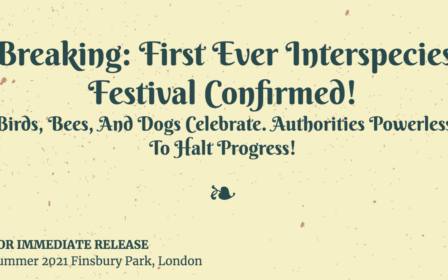 The Treaty of Finsbury Park 2025: First Ever Interspecies Festival Confirmed!