Join the assemblies to plan the festival.

This month the newly formed Interspecies Assembly of Finsbury Park confirmed an unanimous decision to hold the world’s first ever Interspecies Festival in 2022 in London’s Finsbury Park. The festival announcement follows intense speculation about a treaty to ensure equal rights for all the species of Finsbury Park. The decision follows the famous Interspecies Protests of 2020 against 150 years of increasing human colonisation and dominance of this essential green space. In advance of the Festival, everyone is being invited to join a series of public Interspecies Assemblies** and support all groups in having their say!

The Interspecies Assemblies will run online on Mondays during August (2nd, 9th and 16th) and in person on Saturday 21st, 2021 where the session will be hosted outdoors at Furtherfield Gallery/Commons, following the UK government guidelines on social distancing.

** The Interspecies Assemblies are part of a major new project called The Treaty of Finsbury Park 2025. A collaboration between Furtherfield and The New Design Congress.  The assemblies are also one of the experimental productions of our CreaTures Creative Practices for Transformational Futures project.

Illustrations of the Treaty by Sajan Rai.

Infrastructure for the Assemblies by Underscore, a cooperatively owned creative platform.

CreaTures project has received funding from the European Union’s Horizon 2020 research and innovation programme under grant agreement No 870759. The content presented represents the views of the authors, and the European Commission has no liability in respect of the content. 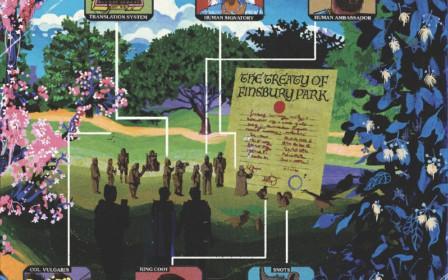 The Treaty of Finsbury Park 2025