The MyCoBiont ExP is going the be – festively – closed with an exhibition by Theresa Schubert experimenting with fungi and sound.

Sound for Fungi. Homage to Indeterminacy began as a laboratory experiment in which Schubert played sinus frequencies to fungi mycelia that she collected in the woods near her home in Berlin. After several weeks of observing these collected samples, housed in custom-made soundproof boxes, most showed a positive response to the sound, growing faster and denser than samples grown in silence.

An interactive video installation simulates a Schubert experiment in which sound influenced mycelial growth. This biological process is explored using a tracking sensor, where hand movements simulate the role of sound frequency and modify fungal growth in real time. The digital three-dimensional environment transitions between macro and cellular perspectives, revealing fragile topologies composed of many nodes and connections. These offer insights into the complexity of the subterranean network of microbes that connect the ‘Wood Wide Web’.

The title refers to the American composer John Cage, who developed ‘indeterminacy’ as an improvisational technique in which aspects of composition are left to chance or free choice. Improvisation, not so much as a musical process but understood as a natural phenomenon of life, is thus a condition of existence itself. This state of being without intention allows for spontaneity and emergence and has been a guiding principle throughout Schubert’s artistic practice.

Simulation development: Sage Jenson. This work has been developed within Mind the Fungi, a research project (2018-20) between the Institute of Biotechnology TU Berlin and Art Laboratory Berlin. 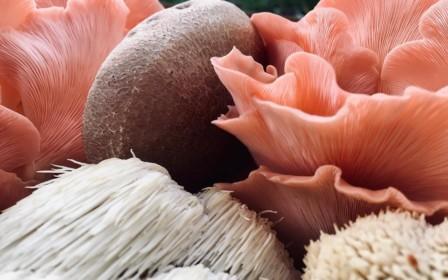