The Seeds of Good Anthropocenes project gathers real-world initiatives that benefit environments and enhance human well-being. The project aims firstly to collect hopeful stories that demonstrate change is possible, and secondly to provide new materials for the development of future scenarios for environmental governance. Scenarios are stories about how the future might unfold, often used by governing bodies to take decisions in the present. Using elements from real-life change processes to create scenarios is a way to add grounded, positive action into these future visions.

“Anthropocene means a world that is dominated by people… how do you have that, and have it be good? It’s jarring to people – but that’s what I want” Elena Bennett

Human influence on the planet is now so great that it has led to the declaration of a new geological age – the Anthropocene. The title of the project – Seeds of Good Anthropocenes – proved to be a creative provocation. The team used crowdsourcing to identify inspiring initiatives that they call ‘seeds’, reaching out to other UN networks, peers and members of the public via social media platforms. The project seeks out transformative practice across all domains (not just creative practice).

The cases were then written up and logged in an interactive repository on the Seeds of Good Anthropocenes website, providing a resource for researchers, practitioners and policymakers. The project team also hosted place-based workshops in North America, Europe and southern Africa that gathered seed initiatives and used them to create new scenarios using participatory exercises.

The seedbank now contains over 500 stories. Most of them address the relationship between people and nature, in ways that were often surprising to the researchers involved.

“A lot of the seeds that we collected… they would start intending to be a project about ‘natural’ things like gardening or restoring – some way that they were trying to improve the environment. When they got to the end they found that “oh we also changed the social system – we made connections among ourselves and it made all these other things possible, we thought we were just building this garden”….It grounded my feeling that transformation has both social and ecological components to it and really made me see those are really intertwined, more even than I would have said before.” Elena Bennett

Six distinctive types of seeds have been identified so far, including: social-ecological approaches to food growing, enhancing wellbeing in urban environments, fostering novel approaches to learning and education, processes for equitable decision-making and social movements for just futures (Bennett et al. 2016). But beyond the content of the seeds themselves, Bennett notes how important socio-economic conditions were in even allowing seeds to come into being. Situations where people worked fewer hours in employment meant that they had more time to give to their communities.

“If you’re trying to bring about a different world, what are the drivers, what are the variables that matter? I think that it at least for me it unearthed some different things that I hadn’t seen in scenario building before. The ones that seem to show up a lot are how people conceive of work and time…we’d see people working in ways that they had more time to give to their communities and that just seemed to change everything.” Elena Bennett

On learning and evaluation:

The team made use of smaller pots of funding to develop the project in a range of directions, learning and reflecting iteratively (rather than using formal processes). The case seed collection has contributed to diverse outputs including talks, events, theses, reports and articles. Indeed, the crowdsourcing and participatory scenarios methods have become known more widely as the ‘seeds approach’.

Watch the Repositories event on the CreaTures YouTube channel, featuring Garry Peterson talking about the Seedbank as a repository of transformative cases.

This project is made possible through funding from the Future Earth FTI program, PECS, ecoSERVICES, and SIDA.

“The Seeds project involves working with people who are doing creative things in the present – transformative activities from all kinds of places around the world to imagine pathways towards a better future. It is just an incredibly inspiring thing to work on” – Joost Vervoort 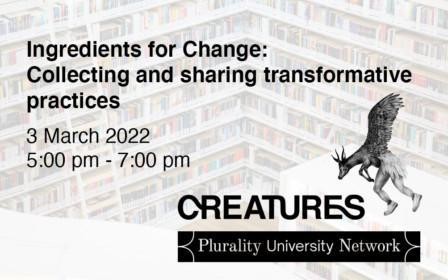