“Risks alone will not get us into action. We have to reframe, we have to exchange the frame of risk for the frame of opportunity. And for this we need new imaginaries – images of a future that can work, that give us perspective and hope” – 2050—An Energetic Odyssey

2050—An Energetic Odyssey is a future vision of a large-scale renewable energy transition in the North Sea, which aims to meet 90% of the North Sea countries’ energy needs in 2050. It takes the form of an immersive installation, featuring an animated map projected onto a low platform. This moving topography beyond human scale, invites audiences to gather around. Starting in the year 2016, a narrator describes a detailed plan to install 25,000 10MW wind turbines into the North Sea. As the animation plays, the audience sees the map changing every year, as each stage of the transition is completed. The narrator fills in concrete details of the vision, touching on the economics, logistics and ecology of the project.

“When we wake up, will this scenario survive the pressure of the day to day policy dilemmas? We have good reasons to think it can. The interactive production of this installation in the cultural domain, forged a coalition of key actors. It is the result of an intense collaboration between designers and scientists, and a consortium with expert input.” – 2050—An Energetic Odyssey

2050 – An Energetic Odyssey was commissioned by the International Architecture Biennial of Rotterdam (IABR) for their 2016 festival. Reflecting their dual role as researchers and cultural producers, they have created the IABR-Ateliers platform for trans-disciplinary investigation. Ateliers are multi-year processes of research and development that orient towards existing global challenges in the built environment. They bring together researchers, policy-makers, industrial and environmental partners. However, the process remains in the cultural domain, allowing alternative priorities and relationships to emerge. The Energetic Odyssey took inspiration from existing efforts to create an offshore grid in the North Sea. An important outcome of the process was renewed relationships between offshore builders, wind turbine producers, ports, utilities companies, environmental organisations and Ministries in the Netherlands. Since the Netherlands held the EU Presidency that year, the installation was also shown to EU leaders and officials.

Maarten Hajer, the co-designer of the project (with Dirk Sijmons) has described the Energetic Odyssey as a technique of futuring – a dramatic staging of one possible vision of the North Sea’s future. Hajer and his colleague Peter Pelzer, argue that the physical materialisation of future visions can provide ways to attract a range of different groups. For audiences, seeing a future ‘brought to life’ through visual, aural and olfactory cues can engage emotional processes that provide different prompts for decision-making (than information alone). Rich, multi-layered future visions are sites for individual and collective meaning-making and can also contribute to more diffuse social imaginaries of what is possible or desirable. In these ways, creative practices can help to disrupt established patterns of environmental politics and offer some alternatives.

Read an interview with the lead designers: https://scenariojournal.com/article/2050-an-energetic-odyssey/ 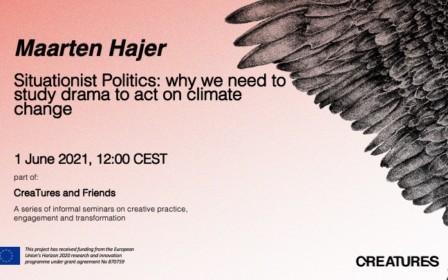